Transforming the Lives... by Jyotsna Raju 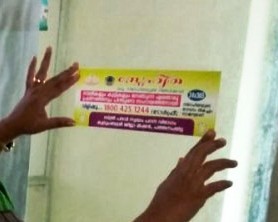 It’s been two and half year I joined the Kudumbashree. Prior to this I was doing only household and was known as a house wife. My skills and knowledge was unutilized at that time. The day I stared working with Kudumbashree Mission I become aware of so many social issues which were surrounded by our society and not even considered as an issue. I understood if someone wants to bring the changes, then there is no need to spend lakhs of rupees it only needs dedication, patience, kindness, and small changes in lifestyle. Being the part of society I took the charge. I happened to find social issues like gender discrimination, geriatric issues, adolescent, family problem etc which were affecting the society to an extent.

Being a part of Kudumbashree (Snehitha) I took the decision to change the scenario. I meet so many people, who were troubling with family problems like children of separated parents, aged parents who have been rejected from their homes, girl child facing inequality in family etc. My job taught me to deal and assist these kinds of people. I started to take initiative towards the welfare of the society by doing certain things. Snehitha’s work gave me the strength to not to turn deaf ear and blind eye to these people, I took the opportunity and tried to be a volunteer of the society. Here I would like to state few of the incidents which I had been dealt with and tried to help them to get solution.

In the year of 2016 a young girl (20 years) approached at Snehitha seeking help to get rid of her current situation. She reached at office by 1.30 am. She and her mother reached at Snehitha, they were bare footed, not even had a single penny to pay off the auto fare. Counselor, me and two more staffs were there at that night. That girl and her mother was too tired and hungry, we fed them, made them relaxed them and then talked to them regarding their problem. Girl informed us that she is living with her step father (Her mother’s third husband) and he is a habitual drunkard and beats her mother and her too. She informed that mother is not allowed to go out of home for anything and he does not support her financially, due to that this girl is not able to pay college fee and she has got her exams also in next few days. At that night also he had beaten both of them. Girl said she does not want to stay with her step father anymore and does not want to continue studies as well. As this girl was pursuing B.A. second year at that time, we consoled her and her mother. Her mother also said she too does not want to live with him. Both of them run away from home and had no place to go. Snehitha provided them Shelter and fulfilled their most basic needs. As it was a case of domestic violence I informed it to police station. Police asked to bring both of them to station in the morning for the further action. I had been to station along with this girl and mother. Her father also arrived; police spoke to all of them. But girl was not at all interested to live any more with father. She was continuously saying that she will drop her studies and do some work as sales girl or maid. I took her back to Snehitha, Counselor talked to her, gave her a counseling and we made her understand that she could have a bright future if she face this situation bravely. Finally girl got ready to continue her studies but has got no place to go. Mother also said she will go and work somewhere as a home nurse and take care of the girl but then girl was needed a long term shelter. I and rest of the staff contacted so many shelters homes but we could not found a suitable place for her to stay and study. Finally me and counselor took it personally and spoke to a sister of a particular shelter home to accommodate this young girl, as they refused in the beginning. We supported her financially to continue her studies for the time being. We got the sponsor who will be supporting her to complete her Degree education. Now she is staying at shelter home, Completed her Degree Education.

I would like to share one more incident; in the year 2017 year a lady reached at Snehitha who had been rejected from her home by her husband. She was a mother of three kids. She informed that her husband has got extra marital affair and does not like her. He used to beat her and uses abusive language even in front of their kids. I called him and spoke to him he said he is not ready to live with her and will not allow her to get into home. However this lady was crying like anything and wanted to go back home. She said she want to live in the same home along with her children and husband. She had been provided shelter at Snehitha itself and case was forwarded to division DySP. I took this lady to the DySP office and her husband was also asked to reach. He was not at all ready to get her into home. Officer and I spoke to him for more than two hours as we wanted both of them to live together happily. However he was not ready to live with her at their home he said he will arrange a rented house for her but will not allow her to get into his house. Finally we reached at conclusion. I requested to officer if husband is not ready to live with her then let him go and live somewhere else on rent. As soon her husband heard this command from officer he started to manipulate the thinks. However he got ready to let her in the house to live. After she had been with her husband we have connected her with a stitching center to avail a livelihood.


Taking chance to help people to get a shelter and care in a proper way, supporting children for their further studies by connecting them to the generous people of the society. By improving my social skills, being friendly and approachable person, I think I do a lot of good to the society. Being humble, polite and keeping smile on face is a great deed; it goes a long way in making a difference to the society.