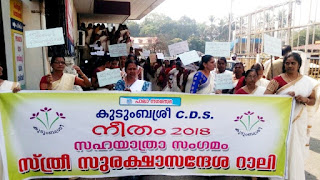 
It was when our core team member Saramma teacher was admitted in a hospital in Cherthala, she became the good Samaritan for a woman from another state. Sivakami hails from Tamil Nadu. She, then a widow, came to Kerala marrying Manoj, a native of Kanjikuzhi, Alappuzha, after they registered the marriage four years back. She motivated him to try for PSC and as a result he was taken into Police service. She also helped him financially to complete the training and other process. She spent all her share from her late husband's wealth for Manoj and his family. Recently, he went out of tough and after searching for him, she got to know that he married another woman. She was brutally beaten by Manoj and his relatives when she went ahead and questioned him. He also refused to acknowledge their relationship and threatened to kill her if she did not leave the place. Sivakami went to lodge a complaint with the Police, but in vain, since the culprit was also a policeman. We contacted Sivakami to know more about her plight and to see what we could do for her. The resource personnel acted on behalf of Sivakami and approached the police. I got involved when they kept refusing to charge the case on Manoj and reached out to SP to resolve the issue. Things were geared up from here & there. Even amidst some political pressure, I determined to go ahead with the case. The case has now reached the court under section 164. Magistrate will soon be calling for a hearing. In between, Sivakami's amma called us from Tamil Nadu with the concern that we will rather stick for somebody from our state and not for them. My answer was simple. "This is Kudumbashree. we stand up for women. And this whole world… for justice."