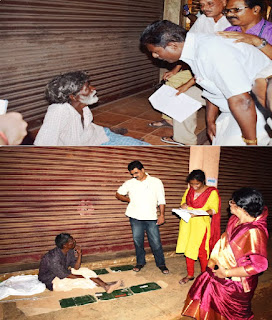 “Never underestimate the difference YOU can make in the lives of others. Step forward, reach out and help. This week reach to someone that might need a lift” ― Pablo.

Manikandan, 63 years being identified as an urban homeless during the pilot survey conducted during April 2017 by Kalpetta Municipality. He has been staying in the street for more than ten years. He is basically from Vechoochira, a rural village of Pathanamthitta district. He had been doing coulee work (rubber tapping) for twenty more years before he reached Kalpetta for as a begger. He was leading a fairly good family life with his wife and three children. His wife, a house maid died of cancer in the year. Calamities haunted again his family in the form of land slide causing damage to his whole 20 cent farm land. Both the incidents cost a lot to the family and Manikandan became very sick and unable to do any job. Manikandan later realized that he was a burden for his children and left the house eventually reached Kalpetta town where he finds his livelihood.

Manikandan, at present, is living in the mercy of some ‘good Samaritans’. He is always concerned about his family and children. But he doesn’t know how to live if he returns home. Like many other urban homeless, Manikandan, as other fellow homeless face lots of challenges such as no access to basic public services such as health, education, food, water and sanitation. In fact the urban homeless are the most vulnerable group who live with neither a shelter nor social security protection. National Urban Livelihoods Mission (NULM) aims at providing permanent shelter equipped with essential services to the urban homeless in a phased manner under the Scheme of Shelter for Urban Homeless. All urban homeless are to be accommodated to permanent shelter homes with elementary services.

Much is known about homelessness in Kerala and its demographics, social impact and causes. Research on homelessness tends to examine societal factors such as unemployment, lack of permanent shelter homes, and personal characteristics such as mental illness, drug and alcohol dependency, personal choice of lifestyle, and even a childhood histories of sexual abuse. The dominant discourse in our society views street dwellers as a vulnerable, incompetent population without the resources or abilities to create positive change in their own lives.

Kudumbashree as nodal agency implementing the NULM scheme in the state has developed methodologies for conducting homeless survey to identify urban street dwellers. The mission considers that all urban street dwellers to be provided with adequate shelter by estimating the size of the homeless population. The survey has been designed as the ULB to undertake the survey with the support of city mission management unit of NULM, NGO/ CBO/ Police Dept. Merchants associations, residents associations, trade unions etc. to identify all urban homeless. As the homeless are visible in the street mostly in the late night (probably after 09.00pm), it is suggested to conduct the survey after 09.00pm. Survey team has to do repeated survey/s in alternate weeks/ fortnightly to ensure that no beneficiary/ homeless is excluded in the survey. ULB has to make all necessary arrangements like vehicle, support from police and other line departments, trade unions, health squad merchant association etc. for the smooth conduct of the survey.

A pilot survey was carried out in 14 major ULBs of 13 districts, except Idukki district, to make the final survey more accurate. The survey team was constituted with Corporation/ Municipal employees, Police, District mission team and NULM employees. This has brought good number of learning, quality experience to make the survey final survey. About 218 urban homeless were covered under the survey. Based on the report, the ULB has to prepare an action plan to accommodate people like Manikandan and other urban homeless to existing shelter homes within the ULB. If required, DPR for the construction of shelter homes to be prepared by ULBs to accommodate more homeless taking care of new inclusion for the coming next 20 years.

This study employs a qualitative, semi-structured interview approach to learn about the phenomenon: the essence of the street dwellers’ lived experiences including their hopes, dreams and aspirations. The interview questions are designed on such a way. The data collected is descriptive, text based, and subjective. This study does not produce any generalizable results. Rather, it achieves its goal of describing and understanding a phenomenon. This qualitative inquiry enables us to produce higher-quality data with rich descriptions of the participants’ experiences.

To identify and learn from Street Dweller dreams, this study attempts to set aside the judgments, opinions, attitudes and perspectives he brings to the study based on his own personal experiences and value systems. Additionally, the methods used to gather data minimize research impact and avoid coloring the results.

This study explores the street dwellers’ attitudes and intentions beyond their immediate concerns for food and shelter. These thoughts and ideas contrast their more practical thoughts of survival, such as finding a safe place to sleep or obtaining their next meal. These cognitions, or what one might call dreams and insights, reveal themselves in many forms such as desires for greater social status, better health, family reunion, reconciliation with a former wife, forgiveness, a closer spiritual connection with a higher power, or a chance to start over and do things differently. The purpose of this study is to discover if street dwellers dream and aspire to improve their living conditions and general welfare.